Ode to the Suburban 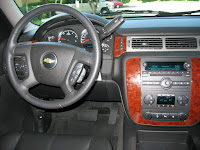 Big and ominous, I denied the cargo and minivans to experience you. You're so long, the number of steps to get around you are twice what I'm used to. Flex fuel and LT are the unfamiliar letters on your body. I could care less about the Flex fuel unless that meant diesel. It seems like a fad right now. This LT was nice, very nice. I sung your praises when loaded but alone or backing in reverse, it was a different tune.


The door opens and long expanses of black leather greet me. Three rows of seat shaded from the tinted windows. No more beige and gray. Smooth and comfortable, the driver's chair is so relaxing. Everyone later comments how comfortable you are. The storage under the armest is huge. A few snacks, camera, radar detector, gps unit, sunglass case, all can fit. In front of the bin, the same minus the snacks, but instead are two cupholders which is removable.


A gentle step up on my toes, all six feet slide right in, passing the running boards. It's a little too tall, this glorified station wagon. Given a choice, I'd probably lower it, but you already knew that!
This modern looking dashboard has so many buttons, so many functions. The steering wheel does too and now I'm confused. It tilts nicely but won't come closer to me. I later learn the pedals will. A few minutes, a few button pushes and suddenly nice cool air starts to gently brush us. My passenger's temperature set ever so higher. XM radio sets the mood, but the rock selection on Sirius is better. Once fully loaded, that hardly matters.


There is an extra stalk on the steering column and I know the button at the tip has something to do with towing. I press it. A light comes on the dash implying a trailer. The transmission downshifts. I think I get it now. However the up/down arrows on the shaft have me wondering. So many gadgets!


Once in D for Drive, I notice there is an "M". Do I dare shift into "M"? It must mean "manual" right? A "6" appears on the dashboard readout! This limo for 8 has a 6-speed automatic transmission. Now how do I downshift? Ah yes, the arrows! Third gear barely helps down a grade when loaded. Second is a little noisy for my posse. The Suburban is so quiet and smooth, any sound out of the ordinary brings unwanted attention to it.

In the daylight I start trying out the other buttons on the dash. Traction control is left on. At a stoplight I turn it off and go full throttle. It doesn't seem to matter on drive pavement. Backing up towards an object, a beeping sound begins. Another button turns that off, but I don't dare. This thing is huge and long after all. The big mirrors are a must.
The headlights turn on and off automatically. An identical knob next to it is for selecting 2 wheel and 4 wheel high and low. Needless to say, conditions don't dictate either one getting turned.
The elders get in and out fairly well, so does the little guy. A sliding door is nice on the minivans, but the two-step fold-forward rear seat allow the youngsters and the youthful to climb into the snug third row seat. It's a loud release and everyone watches their toes, probably unnecessary.
But wait, more buttons. A column of four next to the steering column for information displays and configuration. Pretty cool but for these few days, miles driven is all I really want to know out of curiosity.

Now I'm downtown following a nimble sedan. Well, nimble to my busload anyway. The view is nice but I have to remember my butt hangs out, far. We pull into a parking garage and the low ceiling doesn't hit us. Or is it vice versa? What a relief. The sedan goes up one level via a winding ramp. No need to panic, but I think my cargo of talking heads is paying attention to my driving now. It isn't really driving at this point, it's maneuvering. Slowly. The big rig makes it and we park. Docked! Sure enough, the wiper on the rear window rests against the ceiling. "Was the attendant supposed to let me in here?", I think it for the 3rd of 5 times.

Later, it's just me and my girl. "Woman from Tokyo" starts. Can you jam in this van? You sure can! This thing scoots pretty well but I swear I saw the gas gauge move with my foot.
I toss my sunglasses on the top of the dashboard. The clang and bounce with an unexpected noise. I tap on the surface with my hand and suddenly it's 1982 again. Hard plastic that rattles when tapped on. The doors are made of the same plastic with a narrow, hard ledge for the elbow and forearm. Obviously cost saving measures that makes me realize it's a domestic, not a high-end import. Yet pound for pound and considering utility, it's a bargain. The large windows make for good sightseeing too.

An earlier concern regarding storage capacity turned out to be baseless. It fit carry-on luggage for six people, two bags each. That included 3 females! It fit nine roller bags nearly up to the rear seatback, then the softbags arranged across the top and sides. Not bad at all.

I can't imagine hauling eight around without a cylinder per person. Add the creature comforts and this staple of American people moving has been a very satisfactory experience. More so than a nameless minivan I used years ago. Sure there are nicer SUVS, faster ones, better looking ones, but taking into account the full load, it's tough to beat.

Got a question about cars you would like answered? Performance, racing, modifying, shopping, makes, models, events, etc? Ask me here: AskRobAboutCars@gmail.com and I'll do my best to answer your question and publish it here on Examiner.com!
Posted by Rob Eckaus at 11:03 PM

Thank you for your interest!

Comments are welcome provided they are ON TOPIC and NO profanity. No rants, please. Contact me for requests.

If you see a correction based on your comment that remains unpublished i.e. "rejected", I want you to know I thank you for the tip.